Chiaroscuro; the light and the dark combined in art to produce the illusion of depth, to create dramatic effect. There is no other month in our calendar year that draws out that quality better than any other, than October. Mary Shelley’s Frankenstein monster is perhaps more about revealing in spite of our forty thousand years of civilization we still have ancient devils in our own dark sides. Why is October set aside for those 31 days of scary culminating in a sugar fest like no other? Do we need to be made to fear the dark, in ourselves and each other? Where did this all begin? An oral history told from one generation around a fire is a good beginning. All stories told are just better around a blazing fire that creates its own chiaroscuro.

Monster; the word can either mean enormous or terrifying and here at the end of October is the great celebration of all things terrifying: Halloween. Halloween in the ancient world was not a day of vampires or Frankenstein monsters, those are modern adaptations. What about those feared creatures that the ancient writers spun into their epic tales such as Medusa to make their heroes, appear, well more heroic?

Say the word Gorgon or even the one very famous sister whose name has come down through the ages and immediately we are reminded of a monster. A monster by definition is something that is horrifying or extremely unpleasant, but a beautiful woman terrifying? Stheno, Euryale, and Medusa all three reported to have been beauties. Ovid tells how Medusa was transformed from gorgeous Gorgon to become an instrument to slay yet another monster that nearly ripped a beautiful virgin to shreds.

Medusa so beautiful that Poseidon desired her, she desired him not. Medusa flees and takes sanctuary in Athena’s temple. Poseidon is not put off and pursues the maiden and ravishes her there dooming her for all time. Athena transforms her into a hideous and loathsome monster. If the sea god had chosen any other location but Athena’s temple we would not have this tale of a maiden that not only has her virtue stolen from her but Athena’s wrath was final. So the lesson here is: be not so beautiful to tempt the desire or jealousy of the very powerful.

Medusa inherited a head of beautiful golden hair and this might have placed her in a position of power and yet it was her very undoing. In the ancient world before plastic surgery and all the benefits of liposuction a woman had to inherit good genes, now anyone with a credit card can buy them. Appearance and impressions can be the very factor in how any one person succeeds or fails.

Ancient mythology had several horrifying females young male warriors needed to defeat. On the seas sailors must be wary of Sirens that reportedly had no other purpose than to lead young men to a watery death. It is peculiar that the most dangerous enemy a young warrior can do battle with is a monstrously mutated female. If Perseus had not used dead Medusa’s gaze to defeat famed sea monster Cetus, to rescue beautiful Andromeda would he have been called a hero?

Scylla was a beautiful sea nymph desired by the fisherman transformed into minor sea god Glaucus. Scylla like Medusa desired him not, but he at least sought the help of sorceress Circe to turn Scylla’s rejection into acceptance. Unfortunately for Scylla, Circe wanted Glaucus for herself and so she created a toxic brew to pour into the sea nymph’s pool turning her into a horrible creature with yapping dog heads in her nether regions. This is something not even author Mary Shelley would do to her hero/monster. Being both beautiful and a virgin only brought evil to Andromeda, Medusa and Scylla. Did the ancient writers have a secret loathing of beautiful virgins?

Medea is another female of nefarious history she had a burning passion for young Jason of the Golden Fleece. Medea was daughter to the king of Colchis. Ovid stops short of calling her a princess. Even in the ancient world it seems a princess wouldn’t be quite so fiery about anything, as one cannot be both a chaste virgin and an ardent woman willing to commit a great sin against her own royal house. If you look further into the tale Medea didn’t lose her heart to Jason on his own merit but by the interfering love arrow shot by Cupid; by goddess Hera’s command.

Ancient stories of long gone humans be it Christian or pagan it seems a habit of heroes to falter not by their own faux pas but it seems a woman is to blame. Even Adam hid behind Eve’s skirts before Eve even had s skirt to hide behind. Genesis 1:12 The man said, “The woman whom thou gavest to be with me, she gave me fruit of the tree, and I ate.” Then the Lord God said to the woman, “What is this you have done?” The woman said, “The serpent beguiled me, and I ate.” Eve may have been the first female to have fallen with serpents but not the last.

Ovid’s account of Tisiphone with her tresses loaded with serpents and “girt round her waist a writhing snake,” this Fury leaves no doubt to her serious calling. It seems that like being a virgin, there are no half-measures; either one is a monster all the way or not at all.

Modern readers reading of one ancient hero after another that has his greatest challenge not with an equal opponent but of a female transformed grotesquely by the envy of yet a more powerful female may question who the genuine monster is. Are the ancient writers suggesting that in order for a woman to be equal to a man she must become an actual monster? We look to writers Ovid, Homer, and Virgil; all men leaning on the mystery of monstrous women to make their heroes appear more valiant and their boldness more compelling. Jealousy is present in such a transformation for would the goddess Athena altered Medusa’s golden locks if Poseidon had not ravished her in a temple dedicated to Athena? Would Circe have treated Scylla so ill if she had chosen Glaucus first? Would Poseidon have sent a sea monster to rip Andromeda apart if her mother had not boasted her daughter was more beautiful than all the Nereids?

When I see any ancient representation of Medusa or even the Fury Tisiphone their hair loaded with serpents I think the most forbidding obstacle a man of means could be confronted by was a woman with intelligence and the nerve to speak her opinion. An audacious and intelligent woman was not seen as an equal but rather a monster. Today more than a dozen centuries have passed since these myths were written down and still the drama of the light and the dark are ever present in our world. It is amazing how the centuries change and there are still some people astonished by strong females who are not afraid to speak up and out about ungallant men.

October 24th we welcome our autumn full moon and with it part XII of The Guild.  Cygnet, Silas and Sybella flee from the dark of their subterranean prison to the light above where the greatest danger may lie in wait. May the luminous radiance of our lunar partner reveal only friends and no fiends! What will be the bane of your day? Have you enough candy stowed for the annual visit of monsters, ghouls and faerie princesses’? It would be wonderful if all villains could be simply stopped by the gift of delicious candy. A very happy All Hallows’ Eve to all! 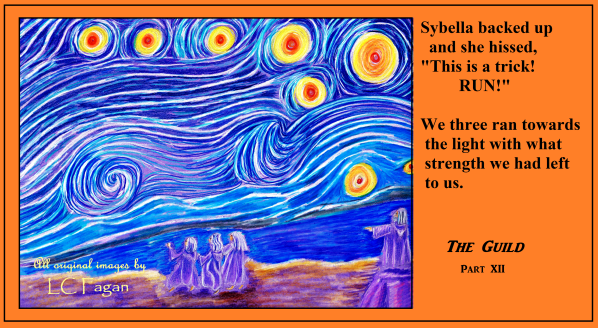