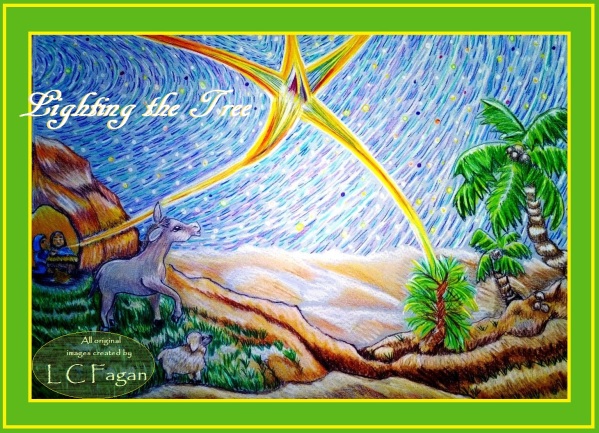 The word nativity as found in Webster’s New World Dictionary: 1.birth, esp. with reference to place, time, or accompanying conditions 2. Astrol. the horoscope of one’s birth —the Nativity 1. The birth of Jesus 2. A representation of this 3. Christmas Day.

My mother had what appeared to my five year old eyes was a miniature stable and rather medieval looking as well. This little building came out like clockwork every Christmas Eve. Today people start gearing up to decorate for Christmas shortly after Halloween, but when I was a child there was a sensible cushion between major holidays. No matter how much I and my four brothers tried to move the decorations for Christmas closer to Thanksgiving my mother was immobile on that.

My mother grew up in a mountain community known to us today as Piney Ridge. She was adamant that a cut tree could not come into the house before Christmas Eve and it would leave promptly on New Year’s Day. It seemed a rather antiquated rule until I was brought to understand that a cut pine tree with electric lights was a serious fire hazard. Living on top of a mountain and the fire hall miles away and down in the valley of McConnellstown it was something no sensible mother would risk her home and children to, what if there were snow?

But we lived in the metropolis of Newport News, Virginia and certainly we could move with the times and my mother did eventually succumb to the convenience of a plastic Christmas tree that didn’t drop needles all over her carpet. What didn’t change for all the modern lights and synthetic trees and plug in candles to put in the window? What stayed exactly the same was that little stable. And that now that I am an adult I realize the merit of that primitive shelter was to remind all in our house why exactly we were celebrating.

The story of the Velveteen Rabbit written by Margery Williams Blanco and even the finale of J.R.R. Tolkien’s character Frodo Baggins share a similar fate. While a stuffed toy that isn’t loved stays pristine and perfect on the shelf of the nursery it also runs no risk of ever becoming real. For Frodo a quiet hobbit of a safe haven known to millions of readers as the Shire, he loved his home is why he took up his pack and hit the road for the absolute scariest place in Middle Earth; Mordor. And did he become real? To face such wicked perils he would appear for those who had the ability to see to become a cup of light.

And that is what brings us back to that shabby little house that we placed our Papier-mâché figures in to represent the very unpretentious beginnings of Jesus Christ. I love that Webster’s merely says Jesus because there was only one born to a virgin mother in a stable. His first cradle was a manger, a trough for cattle and horses to graze from. No matter how glitzy a tree lighting in any cosmopolitan city on the planet is it seems to miss the entire point of the holiday.

If we say we’re wishing everyone a happy Christmas we should also remember that the child’s birth we are so dedicated to in our contemporary commercial extravaganza was crucified as an adult. I don’t mean figuratively, no he was actually crucified while his love ones looked on helplessly. Looking at our little stable we were reminded that the timbers that were used to make a shelter for animals could also be the means to crucify a man. If Jesus had not risen from the dead three days after his death there would be absolutely no reason to celebrate his rustic birth. We don’t say Happy Pontius Pilate Day do we?

We that live our whole lives in America often forget how hard our early patriots fought to win something as fundamental to the First Amendment to the United States Constitution as in freedom of religion. This holiday season we look for the best and cheapest bargains to further our Christmas celebration. Our purchases may have come from the other side of the planet where individuals are not afforded the rights to worship as they wish or not at all. Think of the freedom we have to worship as we wish or choose not to worship at all, that is our privilege as Americans, but what about the people that produced our Christmas lights, ornaments, and gifts? Ultimately, those choices to save a little coin in our own pocket may come at the price of someone else’s liberty. To quote Thomas Paine, “…What we obtain too cheap, we esteem too lightly; it is dearness only that gives everything its value…”

The nativity scene is also a representation of the struggle between the haves and the have-nots as well. Mary and Joseph were far from rich and influential; they were of little means and on the run from an oppressive régime. The origins of the early Christians was ubiquitous with people being murdered and martyred for their faith and that image of people being sacrificed because their beliefs conflicted with a totalitarian ruler is also at the beginning of a colony’s revolt. In our fulfilling land of America, we have the courage to believe that the little person can triumph over the giant much like David vanquished Goliath in the Old Testament.

This full moon I conclude my graphic story The Guild. It has been an eventful year and I look forward to the promise of new adventures in different locations with the New Year. May your holiday season be all that you could wish for. Only in a land of so many rich possibilities could we turn the quiet birth of a humble carpenter into a glitzy extravaganza worthy of a veteran showbiz entertainer in Hollywood.