Home » Uncategorized » Who is your Art Tribe? 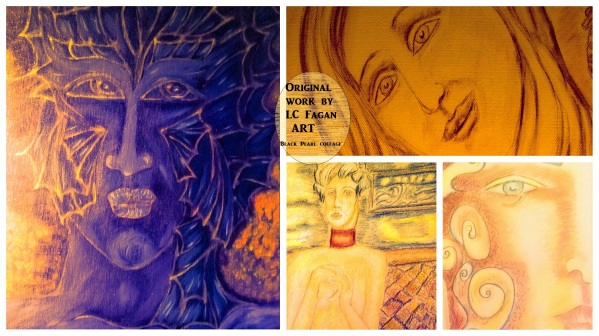 I wonder if Homer was apprehensive about offending the society he was part of with his heroic adventure. I am sure that Frank Zappa would not have been the amazing individual he was if he let social standards rule his output. I think both were driven by their own vision and would not let society dictate their value. Did Gustav Klimt struggle with his vision of art among his contemporaries? Amedeo Modigliani surely suffered and died young, his paintings a lasting tribute to his journey as an artist. For some art is something that hangs on the wall, be it a doctor’s office or a museum, but I have always seen it as a window into another human being’s private journey.

While William Blake wrote and created his art the attitude of his immediate contemporaries was not one of accolades but rather of ridicule. If there is a great hereafter than Mr. Blake may have the last laugh for while he lived he struggled through poverty, but today nearly two centuries after his death he is awarded a private gallery at the very prestigious Tate Britain in London.

Vincent van Gough, if he has achieved the perfection of being that was not afforded him in life may have found it in the great beyond now that his paintings are valued at upwards of twenty-two million dollars. Marketability is the bane of artistic creativity; for art is supposed to be something above the gross conception of wealth and to elevate human beings upwards to the divine. Alas, the gatekeepers ever strive to put it in a safe box; when that is the exact antithesis of creativity. I feel that every blank canvas and every blank page is an opportunity to travel to where we haven’t before, a chance to see a world other than what is conveyed with our waking eyes, a chance to dream. Mr.van Gough saw that even when those around him were blind to it.

The first step in any campaign to control human beings is to remove their gods and their art so that they will forget their origins; their tribe. Those brave revolutionaries who cling to their beliefs even in the oppression of persecution are to be celebrated, not shunned. I believe to make real art, lasting pieces that test our reality one must dive into our subconscious and delve deep, otherwise what is the point? Are we to paint yet another still life of a bowl of fruit? Is that what we want to say as a species about our existence here on this planet when there is so much more to leave to future generations to ponder?

Federico Fellini’s Satyricon is an epic film based on the writing of Petronius during the rule of Nero. The parting imagery of the Coptic style portraits in the final stages of the film is something to remember for one day we will all be a memory; if we are that fortunate. Do we want to be remembered by a bowl of fruit?

I believe if we want to hang in a museum with the serious artists than we must delve past the membrane of reality, into the foreign and strange to find that black pearl that others were a feared to bring to light; the one that has goblins and dragons to protect it.

I believe art is something that can only be revealed by peeling back the sticky skin that separates our consciousness from our subconscious. An artist must plunge deep like a pearl diver to come up breathless with an exquisite gem those less stout of heart would be unable to dive for.

If we dare to be an artist than we better dust off our diving bell, armor and anything else needed to travel to the very edge of reality. We must go beyond to the blue-black regions that hide uncountable monsters and fiends that will lash onto our ankles and bring us even further down. Those monsters are always hungry and waiting…The black pearl is their lure, their welcome mat for those that dabble in the Arts just enough to call themselves artists to their immediate society. A true artist never thinks of themselves as an artist, they leave that label outside the studio door. Nothing will scare off the artistic muse quicker than arrogance.

Truly, artists are brave explorers seeking the undiscovered and returning more lined and wizened at what their subconscious reveals. Artists must be fearless for there are indeed monsters in those deep and dark places where night rests eternal and dawn not even a distant memory.

If we want to be artists beware: the blood we spill will be our own to distract the goblins from their treasure of black pearls. We must also realize that those who haven’t risked their sanity for the treasure will be blind to the wonder of our find. They will look on with veiled eyes and nod knowingly as if our particular strain of crazy might be catching. It might have gone epidemic in Parisian salons a hundred years ago but we won’t be having any of that malaise here. Jack Donaghy may have said it best on the 30 Rock series for those with limited imagination, “We know what art is! Paintings of horses!”

To be an artist is to brave the unknown, the unfamiliar, to follow an unmarked trail without breadcrumbs and the knowledge that when we return we will have left some bit of our ideology to return with a prize invisible to people painting safe pictures and writing safe stories. I do not believe Albrecht Durer, Pablo Picasso, Jules Verne, Alfred Hitchcock, and Federico Fellini created their art in safety for the masses but rather as an invitation for others like minded to join their tribe.

Are you an explorer, an astronaut, are you willing to go where there may be danger and are you willing to do so in front of a blank canvas, an empty sheet of paper; just you and your imagination? If so, than you may be part of the lost tribe of artists. Welcome!